What is an AMM (Automated Market Maker), and how does it work in DeFi? A guide for newbies 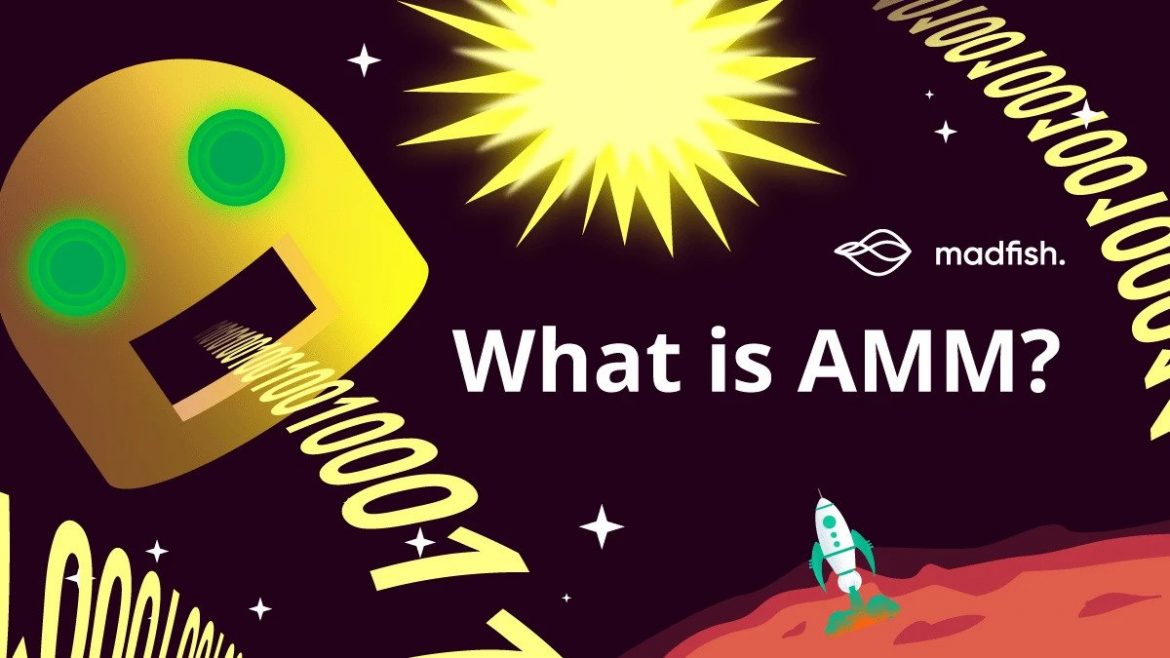 For a long time, exchanges had to use order books, which had to be both filled and analyzed manually. As a result, there were serious limitations in terms of the speed and efficiency of exchanges. Nowadays, with the widespread utilization of computers, automated systems, and the Internet, this is no longer the situation – automated market makers, or AMMs, have replaced the traditional principles and approaches used by exchanges.
The interest of newbies in AMMs, liquidity pools and DeFi is growing from year to year, so we decided to gather the most important information on these topics and create a guide on how AMMs work.

The interest of newbies in AMMs, liquidity pools and DeFi is growing from year to year, so we decided to gather the most important information on these topics and create a guide on how AMMs work.

What is Automated Market Maker (AMM)?

The first automatic market makers, or liquidity providers, appeared on the Forex market in the 90s as alternatives to manual liquidity providers (i.e. live traders) who, thanks to large reserves of liquidity, colluded to manipulate prices on the market.

Automatic liquidity providers, unlike live traders, provide liquidity to assets that lack liquidity at a point in time. Automatic liquidity delivery is necessary for the quick execution of deals and to eliminate situations where people need to wait for deals to be executed. Liquidity delivery is especially important for unattractive assets, which experience a lack of liquidity. By pooling the liquidities of manual providers, it is very easy to manipulate the prices of illiquid commodities, and thereby earn large sums of money.

Decentralized cryptocurrency exchanges (DEXs) faced major liquidity problems after their emergence. Due to the lack of liquidity and the shortage of traders on these exchanges, it was almost impossible to sell illiquid cryptocurrencies as there were either no buyers for them, or their prices were so low that it was not economically viable to sell them.

Automated liquidity providers are automated market makers that remove the liquidity problems faced by decentralized exchanges. They are widely used on Defi exchanges.

Direct liquidity providers are exchange users who supply liquidity (tokens) to the exchange’s Liquidity Pool and receive fees in return. This liquidity is distributed by automated systems (AMMs). Alongside commission, users can often receive other bonuses, for example, project tokens.

The automated market maker system proved so effective that it was even implemented by Binance, a centralized exchange.

Automated market makers enable instantaneous transactions (even for illiquid assets), accelerate the turnover of assets on exchanges and allow both the exchange and the liquidity provider to earn commissions.

Traditional exchanges need buyers and sellers to provide liquidity. It’s often the case that one side outnumbers the other, resulting in a lack of liquidity. This problem was solved by market makers – large players who are willing to buy or sell almost any amount of an asset, with the aim of making a profit by exploiting price differentials.

The question of liquidity becomes important when considering an exchange. This is why liquidity for centralized exchanges is provided by market makers – large and small players who have large and small holdings of assets in their exchange wallets and who can satisfy sufficiently large and small bids in both directions. Market makers continuously monitor assets’ current prices by creating and closing new orders on the stock market (order book). Even the exchange itself can act as a market maker, if it is large enough, by maintaining liquidity with its own earned funds.

The main problem with the order book model is that it relies too heavily on having a market maker (or several) for each asset. Without market makers, the exchange becomes illiquid and inconvenient for ordinary users. No one wants to wait several hours for an exchange transaction. In addition, market makers are constantly changing their exchange rates by creating and closing orders in the book. Supporting such activities would put a lot of strain on the blockchain, slow the process, and ultimately result in end users paying a higher fee. The Ethereum blockchain, at its current throughput of 12-15 transactions per second, simply would not pull such a model.

This problem has long been a concern for the cryptocurrency community. It has led to the development of alternative, faster, blockchains like EOS, and some projects are also planning to build an infrastructure of the 2-level for Ethereum.

Currently, the most popular solution is to abandon the order book altogether. This has resulted in the emergence of decentralized liquidity pools and is the reason why AMMs are so popular in the DeFi system.

A liquidity pool is a vault into which liquidity providers can place their assets and make them available to other market participants who want to exchange with them. If we draw an analogy between traditional finance and cryptocurrency exchanges, a liquidity pool can be seen as a bank. The bank disposes of depositors’ money and also prints new money.

A cryptocurrency liquidity pool contains tokens that are locked into a smart contract account. These tokens are used to enable trading on decentralized exchanges (DEX). Bancor was the first to apply this system, but it was Uniswap that popularized it.

Why are AMMs so popular in the DeFi system?

Firstly, it should be noted that DeFi is not any particular technology, but rather a whole array of software solutions. DeFi is a paradigm that is based on a service that provides financial services. It adheres to the following principles:

DeFi is based on decentralized applications that use blockchain and smart contracts. This is because blockchains, like Ethereum, allow developers to create sophisticated algorithms to store and manage digital assets, and all transactions are conducted without the involvement of intermediaries. The decentralization of financial services is closely linked to the concept of Web 3.0 —  the next evolution of the Internet.

Liquidity pools in DeFi provide the following benefits to investors and users:

Blockchain and smart contract technologies can compete against the traditional financial system. Over time, the development of financial technologies has become easier, which in turn has led to the explosive growth of DeFi platforms. Currently, the total value locked in DeFi is about $26.7B. This is a significant amount of money.

In fact, the AMM concept went to DeFi, but was changed. It became very popular because every user could become a liquidity provider, which led to the development of areas such as DEX, yield farming, etc. In general, the creation of liquidity pools allowed everyone to earn tokens.

For example, Kyber Network was one of the first AMMs that started using automated liquidity pools back in 2018. Suppliers either became large market makers or project teams. The prices of the tokens in the pool are set either by external oracles or by the automatic settings of smart contracts. This is necessary to have better control over the situation in periods of high volatility.

Who is a liquidity provider and how they can earn money?

A liquidity provider is a company or firm that holds assets in its account for the purpose of arranging its sales. They are active on both the buyer’s side and the seller’s side. In other words, they create the market. The volume of trades depends on them and not on ordinary users.

Providing liquidity and making money on spreads and swaps is not the only source of income, and not the only function, of well-known liquidity providers. They offer a large number of other services and a wide variety of investment activities.

Like market maker brokers, they lose money when the investor makes a profit. However, due to their large size and the fact that they offer their services to numerous companies and clients, small losses are always covered by good profits. The differences between a large liquidity provider, such as Deutsche Bank, and any broker is that they are of different sizes and they earn different profits from the services they offer.

Despite their advantages, there are risks in using LPs, both for liquidity providers and for common users. The most dangerous among them are cryptocurrency volatility, fake tokens, fraudulent developers, bugs, admin keys and systemic risks. These risks can do significant harm to liquidity providers, potentially leaving them without tokens.

2. Fake tokens: On decentralized exchanges, anyone can create their own token and trade it. Fraudsters often create copies of tokens from popular projects and this can result in inattentive users buying worthless tokens for real cryptocurrencies.

3. Fraudulent developers: There are examples of DeFi projects that were originally created for fraud purposes. Users do not generally study the code of smart contracts and essentially “give” their cryptocurrencies to fraudsters themselves.

6. Systemic risk: This risk has the biggest impact on the ecosystem. Most DeFi apps or protocols rely on the price of Ethereum. If the ETH price drops to an unexpected level, it could have a domino effect on the entire ecosystem.

A liquidity provider needs to consider the following points when choosing a LP in DeFi:

The most popular models of AMM pools on the market (Uniswap, Curve, Balancer)

The first decentralized AMM was released in November 2019. Anyone can participate in the creation and formation of a liquidity pool and be rewarded in return. The price of a token is only regulated by the pool’s internal mechanisms (the ratio between the number of tokens).

Uniswap is a fully decentralized protocol based on the Ethereum blockchain. It provides automatic liquidity and is currently one of the largest decentralized exchanges by trading volume. A Uniswap pool is formed with only one pair of tokens.

The main features of the UniSwap AMM model include:

In essence, Balancer is similar to Uniswap, but it is different in that it offers new dynamic features that go beyond just a pool for two different tokens.

The Balancer protocol is designed to help users trade their ERC-20 tokens without trust in the platform’s liquidity pools. In terms of operability, Balancer is also designed to work similarly to Curve. However, its overall user interface is perhaps more sophisticated and aesthetically pleasing.

The main features of the Balancer AMM model are:

This is one of the latest AMM projects and was launched in early 2020. Pools can be created by administrators only, but anyone can contribute assets to them. However, there’s one “but” – only stablecoins can be in a pool. This allows large transactions with minimal slippage and attracts large investors.

It is a newcomer to the DeFi space. The Curve is essentially an exchange liquidity pool, built on the Ethereum blockchain, and designed to trade stablecoins quickly and seamlessly. The main features of the Curve AMM model are:

We hope this article was helpful and you have gotten a better understanding of what AMM is. Subscribe our updates to get new educational publications about Tezos and DeFi ecosystems.