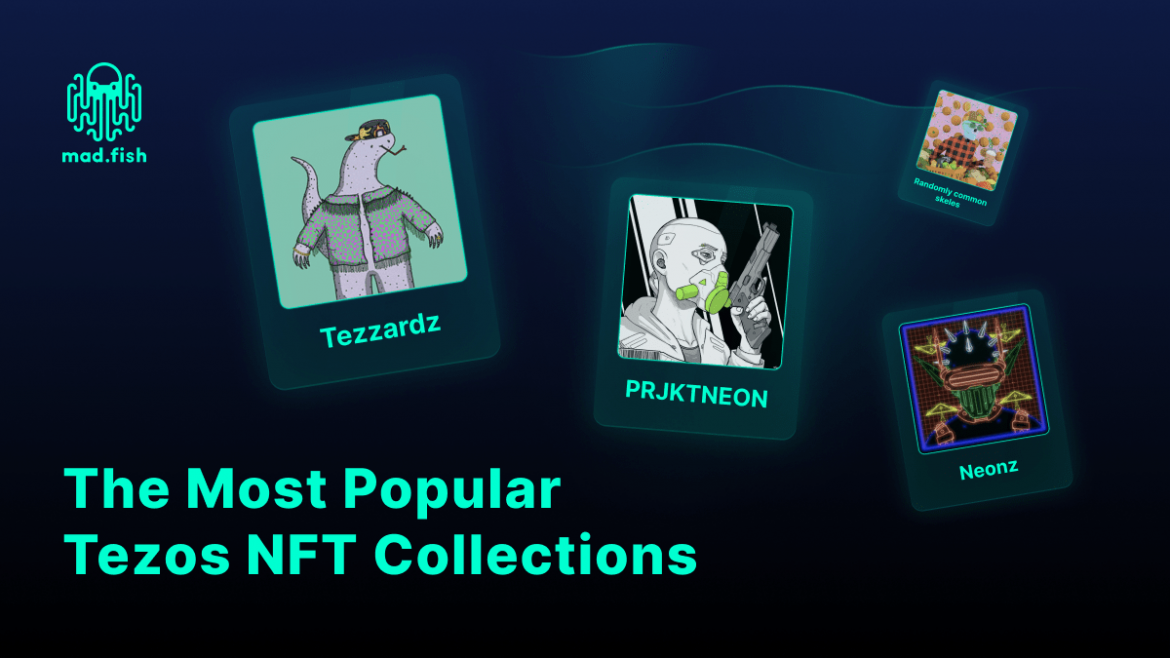 It’s no secret that Tezos is a favored platform among NFT fans. Some of the most successful Tezos projects are associated with NFTs, including NFT collaborations with celebrities and global corporations. During the sales of large NFT collections, users often experience difficulties with normal operations on the blockchain. As a result, this is often when peaks in the Tezos network load are observed.

This article focuses on the most popular NFT collections on Tezos and their sensational sales, which have repeatedly mobilized the community in anticipation of the start of their auctions or mint processes.

Tezzardz is a collection of programmatically, randomly generated snazzy little fukrs on the Tezos blockchain. Each NFT bugger’s token is unique and exists only in a single copy. The distinctive elements of each beetle are drawn and illustrated by the artist’s hand.

The Tezzardz collection contains 4,200 pieces. Each token consists of a combination of 97 hand-drawn traits, which results in billions of unique “bugs”. For lovers of rarity, six super rare 1/1 hand-drawn Tezzardz are hidden in the collection.

It is one of the first extremely popular NFT collections of its kind on Tezos and is still very popular among collectors to this day.

The floor price is 210 ꜩ and there are about 1.76K owners.
Tezzardz Twitter

Dogami is the “Petaverse” that spans over 300 breeds of dogs, each of which has unique traits and characteristics. A long-awaited and exciting project, Dogami is one of the leaders in the NFT segment on Tezos as of Q2 2022.

Dogami NFT tokens have four rarity levels: Bronze, Silver, Gold, and Diamond. In addition to their direct collection values, Dogami tokens will also be used on the augmented reality platform as a key element of the gameplay. By playing the Dogami game, token holders will be able to compete with each other and train and customize their pets. Game progress will be converted into a $DOGA token, the first Tezos-built token added to popular CEXs.

The deepening of developers’ interests in the metaverse likely played a large role in the project’s popularity as this industry has gained frantic pace over the last year.

The floor Price is 280 ꜩ and there are about 3.63K owners.
Dogami Twitter

“Humans are gone. Ottez have moved in. 4,007 generative, collectible PFP otters have taken over Earth”. Ottez is 4,007 NFT tokens minted in the genesis mint at a cost of 8.5xtz in the Public sale. These were the original Alpha-Ottez tokens. Each NFT has its own distinctive characteristics, making the tokens unique and valuable to collectors. In addition, seven completely unique Ottez, called The Magnificent 7, are especially valuable.

The collection’s authors were inspired by the success of PFP projects such as CryptoPunks and Bored Ape Yacht Club and set themselves the task of creating NFTs that could attract huge community attention from other ecosystems. The main goal of the artists was to bring a more environmentally friendly “clean NFT” to the NFT community on Tezos. Judging by its huge trading volumes and its stable leadership in the popularity rating, Ottez is moving towards its goal step by step.

NEONZ is a limited collection of 10,000 unique avatars, randomly generated from futuristic neon character art by Sutu. Each token is a set of hand-drawn static and animated cyberpunk elements. These distinctive elements include unique headgear, face paint, clothing, masks, and glasses.

Neonz NFTs will become the main element of the future Sutuverse metaverse, and their owners will gain access to AR, VR, and Web. The developers promise to actively develop the metaverse in all directions, including all the novelties of this technology.

The floor price is 20 ꜩ and there are about 3.47K owners.
NEONZ Twitter

Ziggurats is one of the most popular and successful NFT collections on the Tezos blockchain created by the equally famous Mike Shinoda, co-founder and member of the Linkin Park band. ZIGGURATS is a collection of 5,000 unique audio and visual NFTs on the Tezos chain, generated from new art and music. The initial price of each NFT was 15 TEZ.

“In ancient Mesopotamia, the Ziggurat was a tall, layered, structure. It was believed that the Gods lived in the temple at the top. Great care, effort, and creativity went into the creation of its complex structure. Likewise, this project is built upon layers of effort and devotion, some elements many years in the making.” — says the collection’s author.

ZIGGURATS has long occupied the first lines on Tezos NFT marketplaces and has one of the highest total transaction volumes in the ecosystem.

The floor price is 24.99 ꜩ and there are about 2.72K owners.
Twitter of Mike Shinoda, Ziggurats’ artist

PRJKTNEON is a collection of 666 cyberpunk, dystopian AVATARS that are programmatically, randomly generated on the Tezos blockchain in a fictional cyberpunk universe. These NFT tokens have 137 different traits with different rarities. Each PRJKTNEON punk has a unique barcode that can be used to identify its rarity. The project is an interactive universe, which will be implemented in several stages.

In the first stage, called “OPERATION FILES”, token holders will have access to comics, lore files, and more that will either be auctioned, raffled, or given away for free. The second stage, “OPERATION CRAFTING”, will provide token holders with access to the crafting platform, where they will be able to create their own NFTs from the PRJKTNEON FILES collection from the airdropped resources. In the last stage, “OPERATION STAKING”, participants will be able to stake their own AVATARS and earn tokens.

Its unusual system, limited supply, captivating storyline, and visual art have made PRJKTNEON a valuable and desirable NFT on the Tezos blockchain. More interestingly, the minting process took place in a matter of minutes and had a measurable impact on the entire Tezos network operation.

The floor price is 80 ꜩ and there are about 445 owners.
PRJKTNEON Twitter

To put it bluntly, randomly common skeles are randomly generated skeletons created by John Karel. It is a collection of unique skeletons with a number of customizable visual characteristics. The number of tokens in the collection is not limited. Theoretically, millions and billions of random skeletons could be minted.

The floor price is 5 ꜩ and there are about 5.71K owners.
Twitter of John Karel, the randomly common skeles artist

“GOGOs are the result of an experiment between Arya Mularama and 0x10 that got a bit out of control… oops”. Project Gogos was a surprise generative NFT drop on Tezos, viewable and tradeable on the secondary NFT marketplace, OBJKT.com. The style is reminiscent of the popular animated series “Rick and Morty”.

The floor price is 10 ꜩ and there are about 1.89K owners.
Gogos Twitter

Tezotopia is considered to be the most popular NFT game on the Tezos blockchain. Tezotopia allows players to earn from yield farming NFTs are known as Tezotops or fight against other players to win loot boxes with various prizes, rare artifacts, and collectibles. The received NFT tokens can be staked to earn.

To start the game, you need to purchase your own piece of land in the form of an NFT token. The player can mine 4 types of resources, such as Unobtanium (UNO), Minerals (MIN), Energy (ENR), Machinery (MCH) These resources are needed to develop the land, to improve buildings and create combat mercenary robots. In battles, players will be able to earn resources, rare NFTs, or even TEZ coins.

Pixel Potus is a collection of American presidents, from George Washington to Joe Biden,  in the form of NFT tokens.

20% of claims and upgrade fees are reserved in the treasury. Unique POTUS owners will each be allowed to claim a single 25% payout at any time up until the final (45th) unique POTUS token is minted. The final POTUS owner will receive whatever is remaining in the treasury when they claim. NFT tokens are the heroes in the game of debate between the leaders of the American nation from different historical eras.

The floor price is 0.1 ꜩ and there are about 11.47K owners.
PixelPotus Discord

Join our communities and follow us for more news and articles about the Tezos DeFi ecosystem!

QuipuSwap Farming and Everything You Need to Know About It